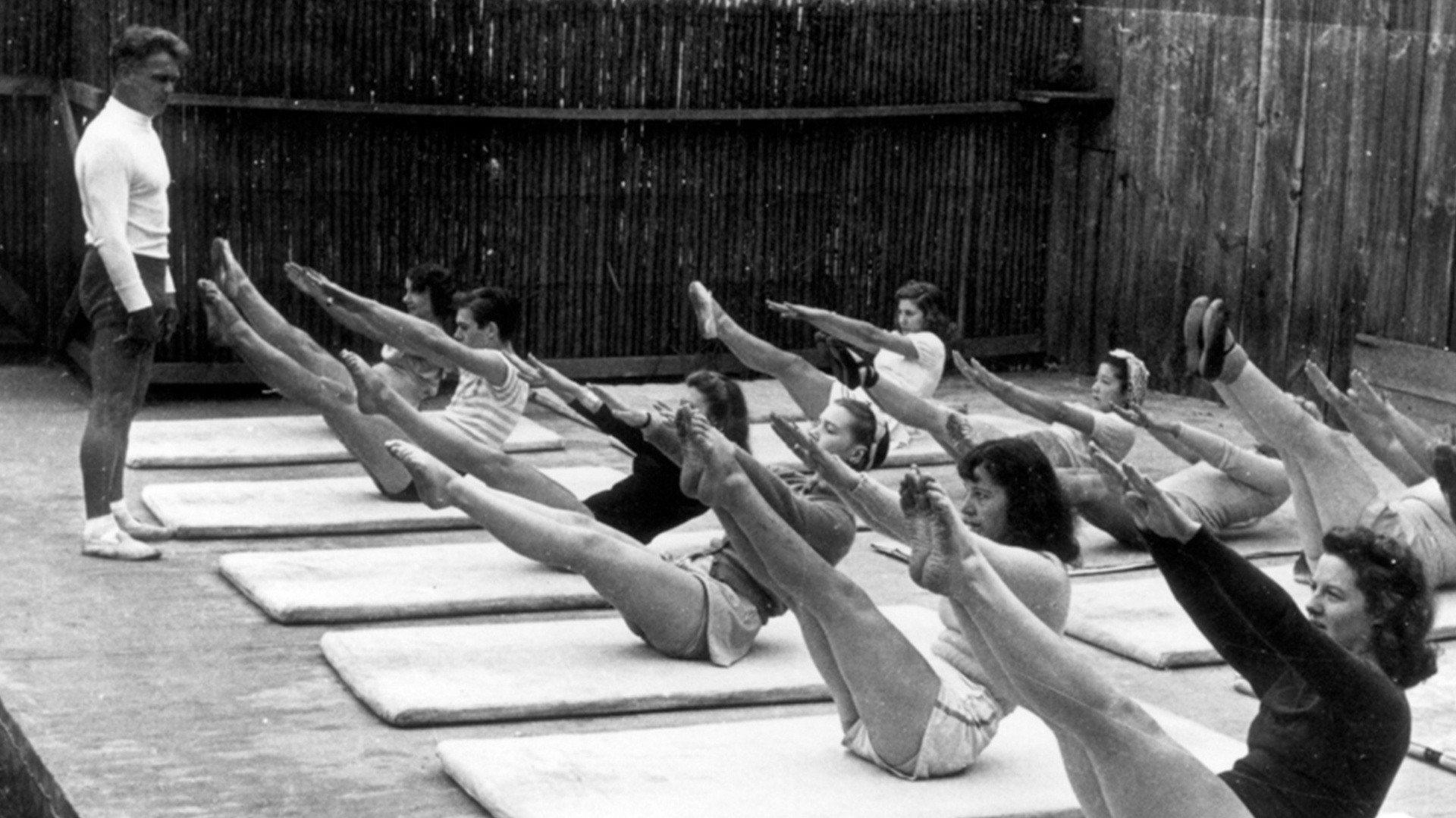 Pilates is a unique method of physical conditioning developed by Joseph Pilates for over 90 years. Pilates exercise combines the philosophy of the West's most dynamic and focused on the physical muscle-East, working on body control and fluidity, based on breathing and relaxation active.

The method finds the strength, joint mobility, balance, flexibility and toning of the major muscle groups, without forgetting the small muscles deep. Gymnastics is a very controlled and intense, the more you exercise, more control.

Joseph Pilates, born in Germany in 1880, was obsessed with the weakness and the many illnesses suffered during childhood, which devoted much of his life to sports and creating a method that allows you to get maximum performance the body with minimal stress or damage.

The philosophy of Pilates, which he called 'contrologia', has gained more and more support and is shared not only by practitioners of dance and sport, but also by many physical therapists and personal trainers that have introduced concepts in rehabilitation.

The method is performed lying on a specially fitted surface to avoid pressure on muscles and joints (mattwork) with pilates machines and rehabilitation. One of the main objectives of the method is to strengthen the body's center of gravity, what Pilates called the 'powerhouse' (center or home office), located in the abdominal and lumbar area. 'By strengthening this area can protect the spine, improves posture and stability of the body, develops body awareness and agility, we have greater control and power abdominal breathing to energize the thoracic diaphragm

The Pilates method is a very complete education body which works on the body as a whole, from the deepest muscles to more peripheral, and that involves both the mind and body.

How does the Pilates method?

This method is based on a safe exercise program very slow and controlled. Practiced with very specific machines or on the floor, under the supervision of a professional, individual tuition or in small groups. Wanted accuracy of exercises in a few repetitions. Breathing, concentration, control, alignment, concentration, fluency are the other key concepts of the method.

How we can help the Pilates method?

The aim is to achieve muscle balance, strengthening weak muscles and lengthen shortened muscles. This leads to increased monitoring, the power and flexibility of the body, respecting the joints and back.

The method is valid for those who are first introduced in physical activity, and for those who seek refinement of movement (such as high-level athletes or performing artists). This also includes all those who might suffer from back problems and seek a preventive activity (Pilates is completely integrated into rehabilitation programs in the U.S. and UK).

Origin and History of the Pilates method

In New York since the 20s until his death in 1967, Joseph Pilates developed the vast repertoire of movements of his method. Although the dancers were for a time the main interest in this method for its efficiency, J. Pilates began his work for ordinary people and as a technique of rehabilitation and conditioning. 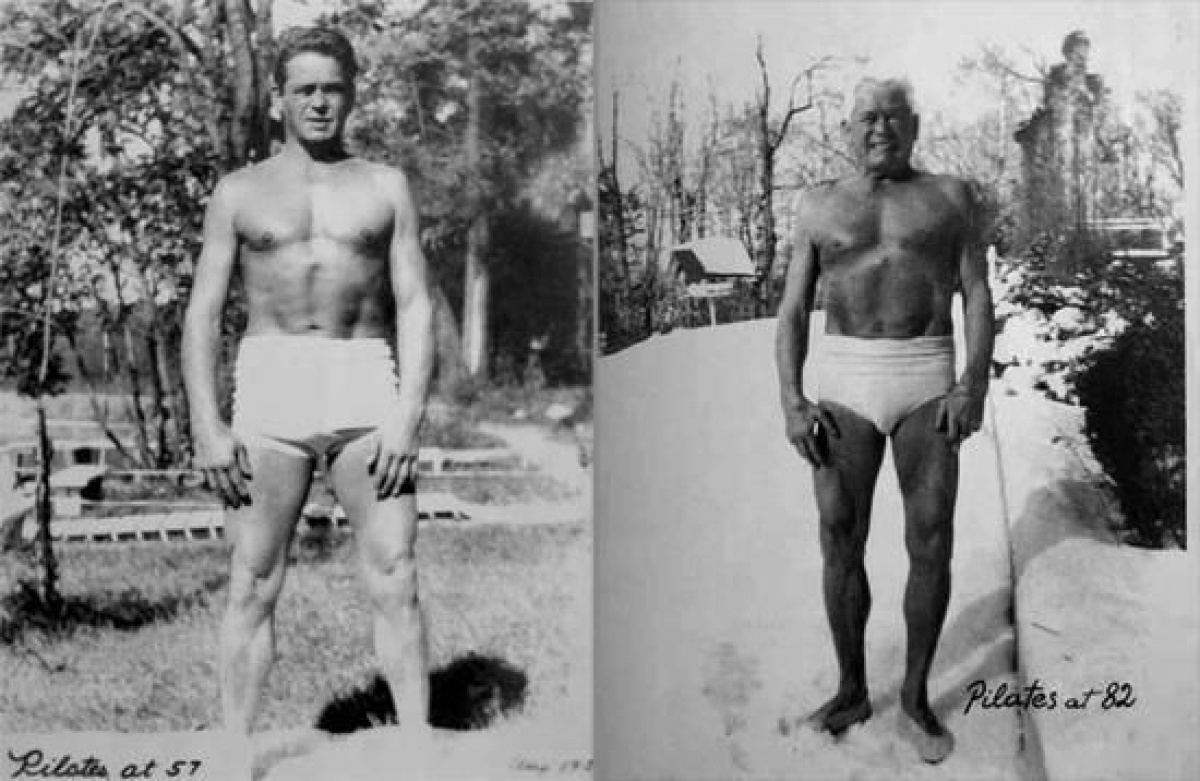 Joseph Hubertus Pilates (1880 - 1967) was born in Moenchengladbach, near Duesseldorf, Germany, in 1880. He was a sickly child who suffered from asthma, rickets and rheumatic fever and spent a lifetime to be physically stronger. When I was young, he studied and excelled in sports such as culture, diving, skiing and gymnastics, and was fourteen years in such a way that was a model of anatomical plates.

He moved to England in 1912, where he worked, initially as a boxer, circus artist and professor of defense staff of the British police. Two years later, with the outbreak of World War I was declared 'enemy alien' and shut him up with other Germans in a field of Lancaster, and later moved to the Isle of Man Pilates became a nurse in the camp and trained to with other inmates who had created gymnastics exercises, starting to have a great reputation when none of his companions suffered the flu in England that killed thousands in 1918.

Pilates continued with its program of physical training in Hamburg (Germany) when the war ended, where he perfected his method with the local police. In 1926, disenchanted with the work they did with the German army, immigrated to the United States. He met his future wife, Clara, on the boat that leads to America, where, upon arrival, he founded a studio in New York that still continues to function. Both Joe and his wife were personally supervising their clients until the mid-sixties.

Pilates and his method, which he called 'contrología', entered the world of dance in a short time. Famous dancers such as Martha Graham and George Balanchine were his followers and sent their students to the coaches. Later, other athletes and performing artists also began to study his method.

Pilates practiced what he preached and had a long and healthy life. He died in 1967 when he was 87 years. Today the dance companies, theater groups, school students and university drama and dance, professional sports teams, gyms and clients of fitness enthusiasts from around the world still use his methods and exercises, which are each increasingly known to the general public.

The perfect balance between body and mind is the quality not only makes the civilized man is more than a wild animal kingdom, it also provides all the necessary mental and physical forces to achieve the goal of humanity: the Health and Happiness. Joseph H. Pilates

The Pilates method, and flow isolation.

Two basic principles of body movement, but complementary opposites, giving the body its immense gestural palette of the finest motor skills up to the strength and agility: the mobilization and stabilization of the joints.

The body is a neuro-musculo-skeletal: the first two qualifiers refer to muscle contraction and the control hand and the third to the complex and articulated skeleton of mobile, real structure to allow movement. No bones or joints, our gestures seem to be shaking of the gel.

A measure of accuracy such as writing or painting must be viewed in three dimensions. Apparently the move only one body part (in this example: the hand). But in reality, is the coordination of all of this together: the body is active, support from the ground to the other end on the move. Although some parties do not seem to move, have a vital role supporting the movement of the other parties. It is the golfer who makes the last few strokes on the green with a large part of his body stuck to the ground without any stiffness.

A body is prepared which has developed into a perfect match with the needs of the shares to make a high capacity to control its deformation (mobility) and to resist deformation (stabilization). And that relates particularly to the spine, the central piece of the skeleton that includes so many chances and then joints.

The Pilates method integrates the two essential principles that are in each year: the fluidity of movement-exercises are always in motion and not in the yoga postures as such-and-joint isolation without losing the holistic approximation as we can emphasize the mobility of a single joint or more when the rest of the body is actively stabilized, maintaining a true relationship with all parties.

In the Pilates technique, parts of the body that are not moving in space have both, but more consideration than those that move. The strength and originality of the method is, among other things, have designed a large series of exercises that focus simultaneously or successively these two principles, forcing them to reorganize each time our body in all dimensions that we have seen above. Her project is literally building a harmonious body, developing their balance, their conscience, the excellence of their coordination, their adaptability, flexibility and strength. That's why a truly comprehensive approach.

Furthermore, the operation step by step and very aware of these exercises allow the economy of learning the gesture by the many repetitions, the method avoids the stress of the joints are consistent and reveal much more safe and effective. In the end, a perfect education of the body, from the gestures of everyday life to the most complex and demanding of an artist or athlete of high level.

The basic principles of Pilates.

- work from inside to outside

For the concentration of a target should be raised :

- learn to breathe properly, then take the air from the nose and the mouth is released, expanding the ribs sideways on inspiration and closing during exhalation

- breathing motion is an integral part in the movement (part)

- is a kind of lateral breathing

Xifoides of the sternum to the pubis and comprises: the transverse abdominal muscle, diaphragm, pelvic floor and deep muscles of the spine: multiphase and others.

From the center limb movements do

control with no risk of injury

- movement, efficient and accurate through my mind and heart

- I concentrate in the center and control

- There should not sudden movements, irregular or causal

- is the key to the quality movement

- know everything about the movement

- execute as perfectly as possible

- movement without beginning and without end

- need to isolate what we want to work and give importance to the parties who do not want to move, keeping them relaxed and controlled.

The Pilates method and breathing.

The Pilates method and breathing.

Over the same repertoire of exercises, which for some can be seen today as classics of fitness are the key principles that define the method. In the method, the shape of exercise matters less than how to do it and the Target (the customizing method according to each one).

Vital function, it allows the absorption of oxygen and carbon dioxide rejection.

If you think about your breath to see how this simple attention unconsciously influence in his rhythm. Voluntary and involuntary phenomenon at the same time is a complex mechanism of nervous, physiological, mechanical and psychological. Thus, a "detuning" breathing may be responsible for other shortcomings, such as pain or poor coordination.

The man can make a mental change that allows parameters (rhythm, amplitude ...) developing techniques such as yoga, singing etc ... that are a true master of this function.

Thus, within a training Pilates (Pilates exercises), breathing is a key principle. Is an integral part of each year is always coordinated with the movement.

In this method, is used to facilitate the stabilization and mobilization of the spine and extremities, two fundamental concepts.

Directly influences the position of the rib cage, which, if it is bad, is considered a common cause of pathology of cervical and lumbar.

It is essential to begin each exercise before relaxing and breathing and helps you get that makes you aware of your stress and helps relax the muscles.

Pilates Different schools offer alternatives in the form of breathing within a year. But it is a major element common to them all.